Over the last two decades, Microcurrent therapy (MT) has been a trade secret among professional riders, trainers, therapists and vets, accelerating natural recovery. ArcEquine is a small wearable MT device offering drug-free, non-invasive pain management that boosts cellular repair – holistically – and has even been shown to reduce vet and physio costs. The rejuvenating effects even gave one retired Thoroughbred a new lease on life.

Las Vegas, a stunning 21 year-old-thoroughbred gelding, 16.3 hands high with a deep chest and muscular build is so athletic that owner Andrea Barnett of Red River, Texas, says he’s often mistaken for a Warmblood. Gus, as they call him, suffered from anhidrosis and a longstanding shoulder injury, but otherwise appeared full of vitality. Racing days behind him, he became an adept dressage competitor, and at 14, Andrea decided he would be perfect to help further her daughter Darcy’s eventing experience.

“Gus has a wonderful personality,” she says, “in dressage, he loves to show off for crowds – leaping over two-foot jumps encouraged by audiences gasps. Darcy and Gus competed in showjumping at U.S. Pony Club Championships at the Kentucky Horse Park in 2014, and were one of the highest level developing rider competitors; the team coming in second – one of their greatest accomplishments; we were very proud.”

19-year-old Gus’ feisty jumping meant maintenance – including frequent check-ups with vet and chiropractor, and injections to his joints. In the 2016 USEA season, Gus, fit and happy, was given the all-clear to compete – but Andrea was shocked to find he was unwell; “A month after we brought Gus to Virginia, we got dreadful news: a routine dental procedure had diagnosed EOTRH. I quickly found a dental surgeon, but an electrocardiogram revealed Gus had atrial fibrillation – an irregular, often abnormally fast heart rate. We were devastated to find out – he had never showed he was sick or in pain. The cardiac department at Virginia Tech said surgery to reverse the condition could be lethal – I could not put our precious friend through it.”

Injury, damage or disease disrupts sequences of electric current within cells, limiting function and recovery, but introducing correct MT – sequences of current replicating natural electric circuitry – kickstarts and accelerates function. Research shows MT radically increases ATP – a high energy molecule that stores and transfers energy within all cells. Hailed as a gamechanger by many, ArcEquine boosts ATP production, enhances and accelerates healing in a fraction of the time, while controlling pain – helping injured horses rehabilitate and return to competition, or everyday exercise.

According to Lena Pearson-Wood, a prominent U.K. equine physiotherapist; “Horses – like humans – gradually become more stiff as their muscle tone and the range of motion in their joints decrease. Their paces deteriorate, negatively impacting performance – whether they’re an animal bred for sport or a happy hacking horse. An older horse might typically be depressed, in pain, thinner, face autoimmune issues or have a dull coat. Because of the way horses move, injury to the back leg can cause problems overall – overcompensating as a result of asymmetry. Since their legs move in diagonal patterns, animals might not appear lame, and issues with gait might not be observed until they land a jump on a harder surface.”

The decision to bring Gus home to Texas came after a visit – Andrea continues; “Gus was clearly depressed with a bad case of rain scald, so we decided to take him home immediately. He was ecstatic to be back in his own grass field, and while I knew I’d made the right decision for his well-being, I didn’t expect recovery. Of course, Gus being Gus, he still showed his energetic personality and enjoyed less-rigorous exercise.”

Andrea felt MT could benefit Gus’ physical and psychological well-being – but didn’t expect he would no longer need supplements to sweat properly. “ArcEquine has vastly improved Gus’ quality of life: he looks and feels better, and is quite capable of leading an active retirement. We don’t expect him to, but he is certainly strong enough to take on the odd preliminary jump, which is wonderful to see, since it’s what he loves. He carries himself better in dressage; his walk is looser and relaxed.  His muscles are stronger, so doesn’t need the chiropractor so frequently, and I note increased flexibility. His general wellbeing and attitude vastly improved. Even at 22, he gets so excited, he still thinks he’s 4 and on the track –I have to remind him that I’m not as adventurous!  It’s a fantastic feeling to know I’ve been able to give him a new lease on life for his golden years.”

Lena Pearson-Wood has seen dramatic turnarounds as a result of ArcEquine use, for a wide range of conditions. She says; “MT works at a cellular level, so boosts repair on all cells – skin; joints; coat; muscle tone and even intestinal, respiratory, or bone – we find horses exhibit higher energy levels; brighter eyes and coats; with aches and pains resolved. ArcEquine boosts the whole immune system, thus general well-being is improved – even autoimmune conditions. The easily portable device can treat up to 4 horses a day – fantastic to get the best performance for eventing. MT reduces creation of lactic acid, so animals can resume training much more quickly and additionally, it can produce a very calming effect before travel or eventing – often in less than ten minutes. Animals who are more relaxed and well-rested naturally perform better. We’ve observed approximately 30% increase in healing speed, and when used in addition to traditional dressings, we don’t see nearly as much scar tissue develop, with infection healing also improved. Owners may initially use ArcEquine for a single issue, such as a muscle or tendon injury, but after completing the program, they’re so happy with results – including increased alertness, higher energy and better overall physical/emotional conditions –they choose to continue the therapy, since the benefits to both horse and owner are so great!” 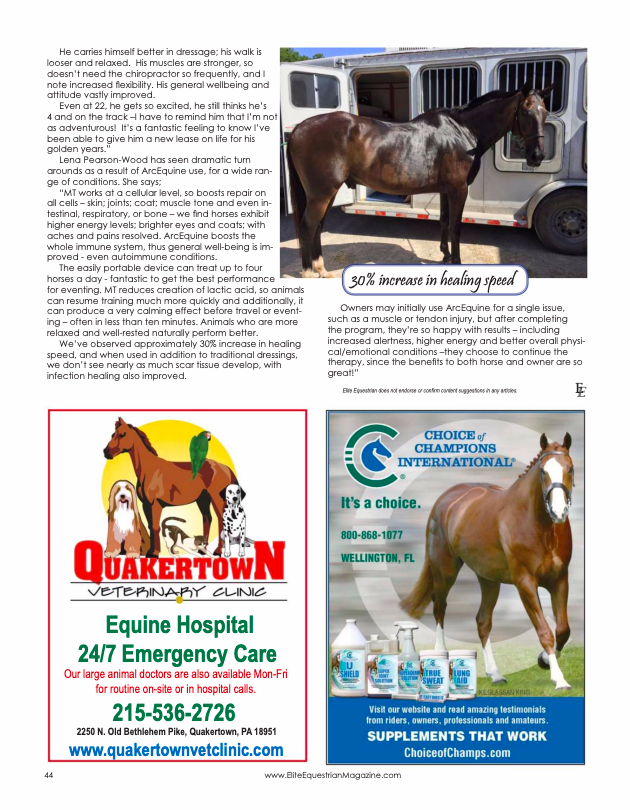 TO LEARN MORE ABOUT OUR SERVICES, VISIT OUR PORTFOLIO.

FOR MORE INFORMATION ON HOW SOPHISTICATED CAN UPGRADE YOUR COMMS, CONTACT US.